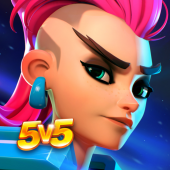 The average rating is 4.00 out of 5 stars on playstore.
If you want to know more about Planet of Heroes – MOBA 5v5 then you may visit My.com B.V. support center for more information

All the apps & games here are for home or personal use only. If any apk download infringes your copyright,
please contact us. Planet of Heroes – MOBA 5v5 is the property and trademark from the developer My.com B.V..

About Planet of Heroes
Planet of Heroes is a realtime action game for smartphones. It\’s set in the genre of Multiplayer Online Battle Arena games, abbreviated as MOBA, and features elements of RPG and RTS and the story elements of an MMO.

You can play solo PVP and coop PVP, practice against bots, complete missions, and unlock new champions on the battlefield, which we call heroes. These are quick 7-minute matches with beautiful graphics and stunning effects, tactical depth, and awesome battles.

Our Game Idea
We have been avid players of the MOBA genre – on PC with League of Legends or DOTA but also on tablets with Vainglory. Even so, we wanted to play these games away from home with no stable Wifi connection – as we were riding the bus or subway, shopping and waiting for a girlfriend to finish up in the candy store, or during a break in a football match.
This made us realize we haven\’t been able to find such a game. There is no MOBA for playing on the go. Either they require a steady connection, are not optimized for smartphones (did you ever try tapping while walking?), have main game modes that are too long for playing on a mobile device, or they rely too much on paid content.
So we thought about how to make the MOBA game genre work for mobile, eliminating all of the obstacles above, and now we’re ready to show you our game in Early Access!

But we\’re not stopping there. Check out what we have planned:

The Developer Team
Our studio, Fast Forward, is an internal development team in the Russian tech giant my.com, also known under the brand mail.ru, based on the success of the app that first grew our company. Across our portfolio of apps and games, you might have played games like Allods, Evolution, or Juggernaut Wars, all from this very office here in Moscow.

Fast Forward consists of veterans in the games industry who have worked on games such as Guild Wars, Aion, Eve Online, Lord of the Rings, Etherlords, Megapolis, Prime World, and World of Tanks. This experience gives us a massive head start in development best practice, yet makes us humble enough to seek advice from the active community. As such, we are working together with streamer personalities like Cowsep, Hastad, Boxbox, and many more who act both as consultants and as advocates for their respective communities.

That being said, we\’d be delighted to hear your personal opinion during Early Access feedback so we can launch strongly into our release in 2017!

Thanks,
Your friends at Fast Forward

How to Play Planet of Heroes – MOBA 5v5 on PC,Laptop,Windows